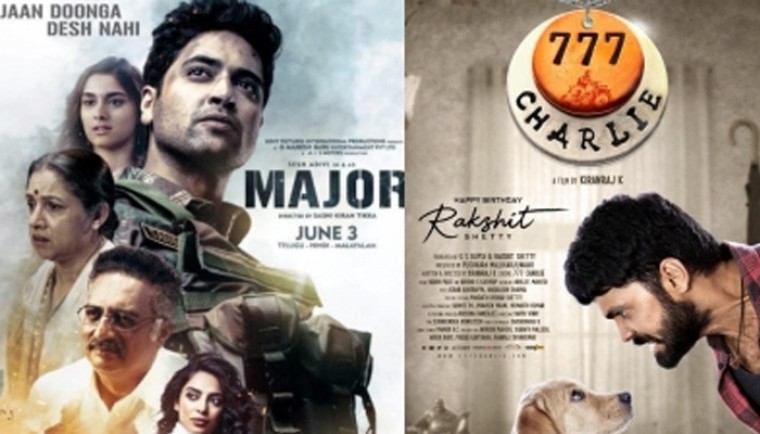 The growing popularity of South-dubbed films across India and the massive success most of these have recorded recently has started a flow of such films into the Hindi belt. So far so good, for the cinemas need content on a continuous basis.

South Indian films can now easily cater to any Indian seeking entertainment from films. There is nothing that the South films lack compared to the Hindi language. In fact, they offer much more and better content. Their production is slick, the money spent on the films shows on the screen. What is more, the breed of stars is as suave and trendy as any other young person across the country.

Some of these stars may have been around for long, but to the Hindi audience, they come across as fresh faces compared to our 50+ stars. Most of all, the South actors are backed by films with scripts that stick to traditions while being contemporary at the same time. The action is always claptrap and the final outcome is slick.

Somehow, when a South hero fells ten men with one kick, it looks more convincing than when the same action is done by a Hindi film hero! It is becoming more obvious now when the TV movie channels and OTT platforms are full of South-dubbed films.

Why do Hindi remakes of South often fall short of the original? I think it is that just because it is not something you worked on and conceived, you can't nurture it the way the one who did.

Of course, the Covid-19 pandemic-forced lockdown affected all, including the film industry. Cinemas had to shut down and OTT platforms stepped in as an alternative. Also, the films on movie channels attracted more eyeballs all across and it so happened, South Indian films dominated. The thing is, people are opening up to other sources of entertainment.

The Covid-19 pandemic, however, was no reason for Hindi filmmakers to lose touch with their craft and with what the people wanted. Once the lockdown was lifted and films started releasing on a regular basis, viewers just wanted the usual entertaining films to be back. With most films, the letdown was gross and total. To add to this, the flow of new films has been uncertain, especially of the big bill movies.

The result was that the vacuum had to be filled. The cinemas, after almost two years of lockdown, needed content and dubbed films from the South filled this gap, and successfully at that. Since then, in the last year or so, we have seen South Indian films shattering box-office records and battering the collections of Hindi films.

Now, filmmakers in the South have realised that the North (in South trade circles, the Hindi film market is called North) is open to them. You saw South stars on Hindi TV channels promoting their films, print media also giving them due coverage. (Every space needs to be filled.)

But now the South is going all the way to consolidate their acceptance in the Hindi market. What they have thought up to promote their new films shows their extreme confidence in their product while also being ready to take risks.

The film that had a regular release all over this past Friday, 'Major', also had what they call 'Pre-Release Audience Screenings' in nine cities across India in the last seven days of May, starting with May 24.

The same strategy has been adopted by the makers of the Kannada film '777 Charlie', which is due to be out on Friday (June 10). The film has been having staggered premieres in 21 major cities all over India since June 2!

Hindi filmmakers have tried a paid premiere experiment one day before the actual first day, but the experiment has mostly had disastrous outcomes. To have a weeklong pre-release showing of a new film can make or mar it. That, though, is the next step South Indian filmmakers have decided on to become an equal player in the Hindi market.

But this makes one wonder, if all South Indian films are dubbed and released in the Hindi market, what will remain for our Hindi producers to remake!?

In God We Trust: The Temple Run

Of late, filmmakers have been veering towards themes based on nationalism with a patriotic film in-between. They like to cater to popular tastes. This audience's taste is determined by a lot many things, the chief among them being the prevalent national mood. And that national mood, again, is what gives a film ready acceptance. A film needs to reflect the mood of the masses, which then at once identify with the film.

All nationalism may not always work. Especially so when it is a chapter out of Indian history at the time of the Mughals. As per the texts made familiar to us, there were no Indian heroes; they just fought and lost. At best, they merit a two-page mention in primary schools. People readily believe in the 'Mahabharat', but not so when it comes to the tales of the valour of kings and 'samrats'!

We now have this film, 'Samrat Prithviraj', with the tagline, 'Aakhari Hindu Samrat' (The Last Hindu Emperor). The only king who has been identified as the protector of Hindu ways was Chhatrapati Shivaji Maharaj. Never knew or learnt of that tag being used for Prithviraj Chauhan. The stakes are high. You can't bet solely on an actor's charm. Hinduism is in the air, so might as well use it for a little flavour!

Akshay Kumar, actress Manushi Chillar and the film's director, Chandra Prakash Dwivedi, are out on the pilgrimage circuit, doing the Ganga 'aarti' and praying at the Somnath temple with pictures being flashed all over the media. These remind me of our school days and the temple run before the exams and then the results! As things look now, nationalism and Hinduism are being blended.

More than religion, the ritual of performing a mahurat for a film's launch was a tradition. Garlanding the clapper board and the camera being the things to do. It was a tradition and have nothing to do with religion because it was an industry norm and therefore all filmmakers followed it, Hindu, Muslim, Christian, Sikh, or from any other belief.

Yes, some filmmakers did take a reel from the completed film to Mata Vaishno Devi or the Shirdi Sai Baba temple, or the Siddhivinayak temple in Mumbai, or to Ajmer Sharif for blessings. but that was a matter of personal belief.

But no maker went on a pilgrim circuit to promote a film, or to appeal to the sentiments of viewers, least of all film stars. Once completed, a film was the producer's baby.